Due to decreasing COVID risk level in Berrien County, Michigan, it is now optional to wear masks. 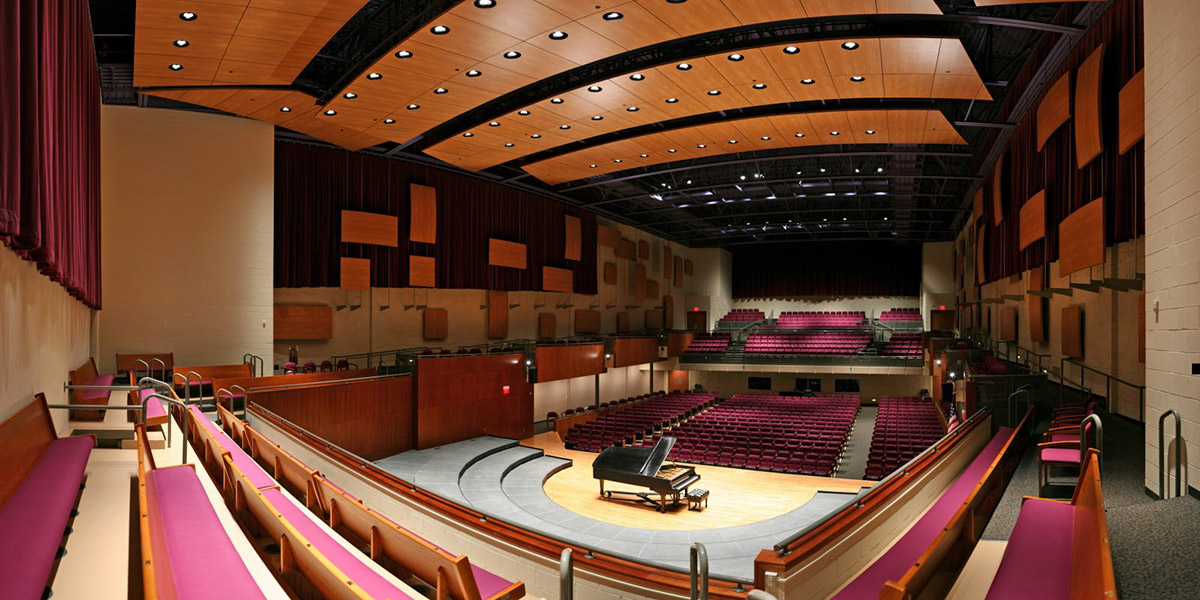 Completed in 2003, the Howard Performing Arts Center boasts a spacious, light-filled lobby and an 840-seat, state of the art concert hall.

Everything about the Howard Center was designed with acoustics in mind, making the concert hall virtually sound proof. There are no structural connections between the hallways and the main concert hall to prevent vibration and outside noises from transferring to the main hall. The roof alone is eight inches and 1.3 million pounds of solid concrete, ensuring perfect sound quality, even if a Boeing-747 were to fly overhead.

There are no right angles within the hall and no two walls are parallel. Acoustic clouds are suspended from the ceiling and work to push the sound out to the audience. Even the cherry wood paneling around the stage was chosen for its effectiveness at reflecting sound.

In order to avoid the sound of blowing air in the house for heating and cooling purposes, there is a 9-foot deep plenum underneath the seats. This plenum is pressurized with a high volume of low pressure air that is dispersed through the circular air vents. It takes 24 hours to change the temperature in the concert hall just one degree.

The house seats 840 people: 400 in the Orchestra section (main floor), 300 in the Balcony, 40 in the Loges,or box seats, and 100 in the Choral Terrace. The Loges and the main floor are fully handicap accessible.

Outside the main hall is the Howard Center lobby. With floor to ceiling windows which allow lots of natural light,the lobby has a feeling of openness and a view that looks out to the heart of the Andrews University campus. The lobby's space allows for 840 people to stand--the same capacity of the concert hall. The lobby is often used for special events, wedding receptions, and dinners. In addition to the glass panel displaying the names of generous donors to the Howard Center are beautiful stone pavers along the perimeter of the lobby that are available for naming opportunities.

The Howard Center is also home to the John and Dede Howard Studios, which broadcasts the local classical radio station WAUS-FM.